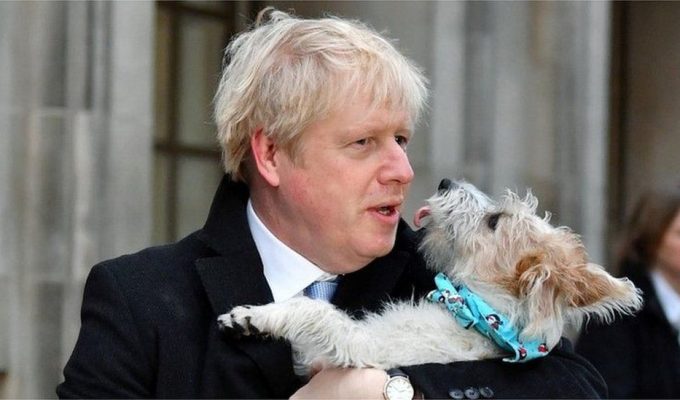 The Prime Minister’s pet dog, Dilyn, made headlines earlier last year as he carelessly gnawed at the antique furniture at Chequers in Buckinghamshire – leaving Boris Johnson with a chunky four-figure repair bill!

It was reported that the PM asked someone to “please shoot that f****** dog” after it damaged the antique furniture and left a grand mess too. Mr Johnson was heard saying that he had to foot bill immediately to ‘keep things good’ and under wraps as much as possible.

Unfortunately, when the news of the latest ‘Dilyn-related’ drama emerged, it had only been 24 hours after the dog had sparked quite a row in Downing Street by relieving himself on a senior aide’s handbag in the No 10 garden! The aide, Miss Katie Lams, resigned afterwards, although the press was assured that she resigned on good terms and that it was a “massive loss to No 10”.

Well, it’s probably fair to say that Dilyn caused a bigger stink at Chequers, Buckinghamshire – where the PM and his fiancé spend the majority of their weekends.

According to one insider, Dilyn darted under Mr Johnson’s feet while holding on to an old book – this is when the “famous line” was heard. Luckily, it didn’t come to that and the dog is fine.

According to a witness, it was a Lauren and Hardy-style fiasco – a kneeling PM trying to reclaim the old book from the dog’s jaws while Dilyn stubbornly held on. One Government source has been quoted as saying that the PM’s dog is not at all popular with the Chequers staff – causing repeated havoc as a result of gnawing at the furniture and soiling the carpets, which need to be immediately cleared up, of course.

So, what happens to Dilyn now?

There were rumours swirling around after the incident that Dilyn may face an indefinite ban from Chequers, although these were dismissed soon after. A Government official defended the dog, citing that it wasn’t his fault and that he simply did not appear to have good training as a pup.

Sure enough, Dilyn was abandoned by a puppy farmer due to a misaligned jaw – later rescued by the Friends of Animals Wales charity, before he was adopted by the PM and fiancé, Ms Symonds.

TeamDogs, a Wales-based community for dog lovers, actually sent a love letter to Dilyn saying how it wasn’t his fault at all. Here’s an interesting excerpt from the letter:

“It’s been a tough few weeks for you, old chap – accused of shredding ancient books and furniture at Chequers, cocking your leg in inappropriate places, and dominating the time of one of Downing Street’s official photographers… What’s an honest hound supposed to do to win back the love of the British people?” –Source

This isn’t the first time Dilyn has had to put up with threats of getting shot. On one occasion, he wandered into a farmer’s field, who threatened to “shoot the dog if it happened again”.

Despite these ‘angry threats’, friends of the PM have assured the general public that everybody loves Dilyn. Downing Street declined to comment, naturally.

Perfect-Pets Books has a complete collection of the most popular dog and cat breeds available as Essential Guides that cover a variety of ‘essential things to know’ including first aid basics, microchips, vaccinations, insurance, and appropriate breed care.

In addition to breed books, useful Essential Guides for issues such as dog training, rescue dogs, and first aid for cats and dogs are great favourites full of valuable information.

Major, President Biden’s shelter rescue dog, has been hitting the headlines for all the right…

8 Reasons to Adopt, Not Shop

Boris Johnson has been in the news a lot recently, for a number of reasons…