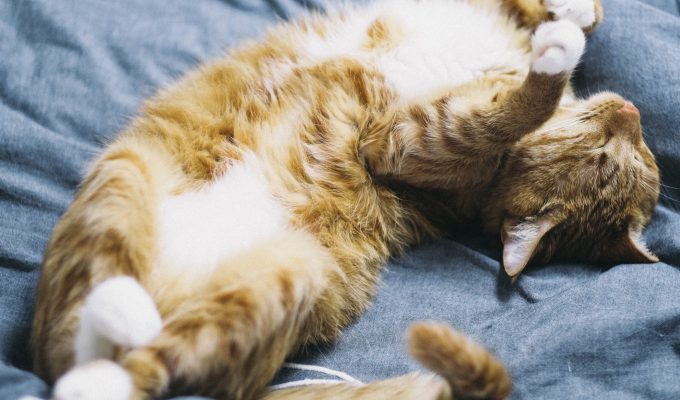 Just because your cat can’t speak English doesn’t mean they can’t communicate. In reality, cats communicate their feelings all the time, whether it’s by pinning their ears back when they’re nervous or wiggling their tail when they feel playful. This Hug Your Cat Day, why not take a moment to learn more about kitty communication so you can find the perfect time for that hug?

Your cat’s tail, ears, eyes and posture all work hard to express how your cat is feeling and what they’re thinking. From identifying an illness sooner to picking up on their mood and identifying situations that cause them distress or pleasure, we can care for our cats much more effectively when we understand their body language.

A lot of non-cat-people like to claim that cats are impossible to gauge because they don’t express themselves as dogs do, but pay no heed! All we need to do is learn to speak their language and they’ll tell us all we need to know.

Across the animal kingdom, ears play an essential role in communication. Ours allow us to quickly size up any situation by hearing words, sounds and inflections, and are more or less static. Cats use their ears to hear, but they do so in a way that makes our aural set-up seem almost primitive. They can pinpoint sounds five times further away than a human can, rotate independently to 180 degrees and hear at much higher frequencies too. Cats’ ears are also a beacon of information, and learning the various ways a cat can hold their ears can help us interact with them more easily. 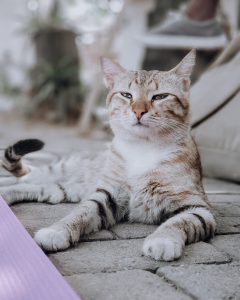 How Is Your Cat Holding Their Tail?

A cat that’s about to pounce on a toy or is otherwise focused on something may slowly wave their tail, while a lashing or flicking tail signals that the cat is agitated. To help pet owners understand cat tail language, animal behaviourists have done exhaustive research and broken the complicated communication down to a number of easily-learned points:

What does it mean? Your cat is feeling friendly. Let your cat sniff your hand, and see if they’re up for a hug.

What does it mean? Your cat is feeling aggressive and worked up. Don’t try to pet or play with your cat.

What does it mean? Your cat is feeling happy and self-assured. Offer your cat treats, scratches and cuddles.

It’s well worth taking the time to learn how cats communicate, as this will make understanding them much easier. Both your and your pet’s happiness in the home can really hinge on your ability to pick up on the many emotions and messages your feline companion is sharing at any one time.

Your Cat’s Ears: Airplane or Pinned Back?

Survival was the key goal in kitty evolution, as cats are both prey and predators. The key to staying alive is being able to hear prey and predators, which is where their unique ears come into play. When they want to pay closer attention to what’s going on around them, your cat will move its ears straight up and forward. They may even hold their ears in different directions entirely.

This is your cat trying to figure out what’s going on, what’s making the noise and who is nearby. Alert, forward-facing ears will also make it easier for your cat to execute a successful pounce, as it allows them to collect as much auditory information as possible. You’ll know you have a great guard cat if they tend to patrol your home with this ear position. When there’s a sound, a cat’s ears will rotate towards it.

Read More: Which Cat? An essential guide to Britain’s 20 most popular breeds

Whether it’s a suspicious rustling or their human’s voice, they will point their ear canals in the direction of the noise.

Moods can also be communicated through the ears. When your cat is alert, their ears will be up and forward, while an anxious or tense cat will hold their ears sideways (this is known as “airplane” ears). When your cat experiences something new, you’ll probably spot them making airplane ears.

Your cat will generally hold their ears facing forward in a “neutral” position when they’re relaxed and just being a cat. Cats will often greet their humans in this way, and will also use the posture with their feline friends. When your cat wants to chill out (and when they’ll be most comfortable with a cuddle), you’ll see those neutral ears. You aren’t going to find a better time to get your snuggles, so pick up that cat and take advantage of their friendly mood!

A very different message is signalled when your cat holds their ears backed in a “pinned” position. The flatter those ears get, the more fearful the cat is, and this is when you’re most likely to see aggression from your cat (so no hugging).

Aggression is common in cats with their ears pinned back, even though the stimulus is typically fear-based. It’s a good idea to monitor your cat’s pupils as well as their ears. Your cat’s pupils will become larger the more afraid they are, but a cat which is “on the offensive” won’t have particularly large pupils. If a cat is feeling very aggressive, they will move their head side to side with their ears turned back.

Aggression will often be signalled by pinned-back ears along with aggressive body posture and vocalisations. If you listen to your cat here, there’s no need to fall out.

Checking whether or not you can see the opening of their ear canals is the best way to figure out if your cat is doing anxious “airplane” ears or aggressive “pinned” ears. If you can’t see those openings, stay well clear!

For more on kitty care and building a strong relationship with your feline friends, check out The Essential Guide to Cat Care from Perfect Pets.

10 Most Expensive Cats to Buy in the UK

Pet ownership has been at an all-time high since the lockdown, and the UK is…