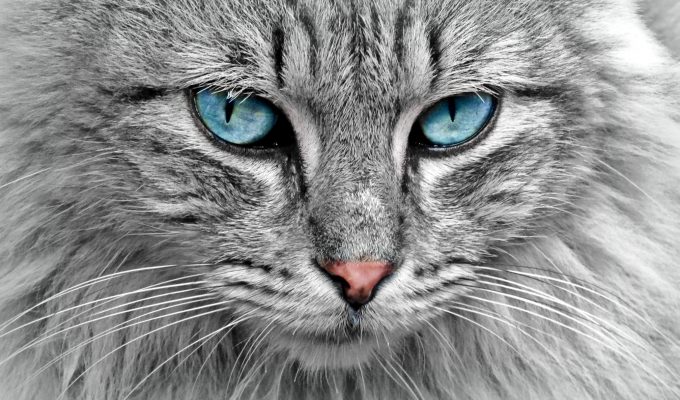 We’ve said it before and we’ll say it again: Just like humans, cats are a unique species with specific body language, nutritional needs and preferred learning methods. Many people believe that cats are unreadable, unpredictable and non-communicative, but this couldn’t be further from the truth. Your cat is communicating with you all the time through their eyes – all you need to do is learn to listen.

From identifying an illness sooner to picking up on their mood and identifying situations that cause them distress or pleasure, we can care for our cats much more effectively when we understand their body language. A lot of non-cat-people like to claim that cats are impossible to gauge because they don’t express themselves as dogs do, but pay no heed! If you want to build a strong bond with your cat and avoid any misunderstandings, learning to interpret your cat’s messages is a must.

Across the animal kingdom, ears play an essential role in communication. Cats use their ears to hear, but they do so in a way that makes our aural set-up seem almost primitive. When they want to pay closer attention to what’s going on around them, your cat will move its ears straight up and forward.

Cats use their facial features, body and tail to communicate between themselves and their humans, with messages of devotion and irritation communicated by every blink, twitch and flick. It’s well worth taking the time to learn how cats communicate, as this will make understanding them much easier. The cat’s eyes are one of the most expressive parts of their body and are able to communicate a surprising number of different messages and sentiments.

You would be amazed at what a cat’s eyes can do. They let your cat hunt prey with their amazing motion detection, and allow them to see in near darkness. Coming in almond, round and oval shapes and coloured blue, green and gold, a cat’s eyes undergo physiological changes in eyelid position and pupil size to communicate emotions and messages. Their pupils can widen into massive black dinner plates or shrink to the narrowest of slits, while eyelids may be drawn into a squint, opened fully or closed half-way.

The reasons for these changes in pupil and eye shape range from environmental factors like changing light levels to emotional responses like excitement, anxiety, aggression or pleasure. And there’s just something about those vertical, slit-shaped cat’s eye pupils that fascinates us humans.

When feelings of pleasure, aggression or fear become aroused in your cat, their pupils will narrow to the tiniest slit. If your cat encounters a mouse (whether real or filled with catnip), this is the look you’ll see in their eyes. In cats that like catnip, the slightest whiff of the substance can cause these narrow slits. If your cat has slit pupils and is hissing or growling, this is a good sign they’re feeling angry.

If your cat is feeling aggressive, their pupils will narrow and their eyes will be squinted. Playing with your cat when they’re like this isn’t the best idea, and anyone that tries to pet them could end up with a few scratches. You can safely assume that your cat is feeling relaxed and happy, however, if their pupils are narrow while they’re relaxing on your lap and purring.

With cat eye-signals, you’ll often have to look at your cat’s other body-language cues and the other things that are going on around them to work out their meaning. This is especially true of cats who are displaying dilated pupils, as this can signal both fear and excitement.

A cat’s pupils will dilate slightly when they’re showing interest, and the eyes will look more directly with an unblinking stare at whichever animal, person or thing they’re interested in. This is a message of “I’m not looking for a fight, but I see you.” However, it’s also a message of dominance: a cat will send their adversaries this look to assert ownership of their territory, food, water or toys. It’s a subtle cue, and one that many humans will miss.

A cat that is being confrontational and threatening will issue their target with a direct stare. The pupils in this case can be either dilated or slitted, while the eyelids will be squinted to protect the eyes from potential injury. The brow will be furrowed and pupils dilated if the cat is on the defensive. A cat with this expression should be avoided, and direct eye contact should not be made.

Pain in the body or the eyes themselves will often be visible in your cat’s eyes, which is useful as they often put on a poker face in these situations. A cat’s pupils will often be dilated when they are experiencing body pain. Depending on the cause, however, a cat experiencing eye pain may have pupils that are dilated or constricted. Pain in the body or eyes may also be signalled through squinting or bloodshot eyes.

Cats can sometimes develop a condition called anisocoria, where one of the pupils appears larger than the other. This is not a disease in itself, but a symptom of other illnesses. This should be treated as an emergency, as it can be a sign of something serious.

If they’re gazing at you with their eyes wide open, your cat is feeling friendly. Offer them treats, scratches and cuddles. Cats signal trust by displaying alert, wide-open eyes. Pupils are at normal dilation for these friendly greetings, and the cat may offer cheek rubs with their eyelids squinting and brows soft. This is a good sign that your cat trusts and loves you.

Of all the possible cat eye-signals you can receive, this is the best one! Cats communicate trust and affection through slow eye blinks, signalling a state of bliss with a sleepy, dreamy appearance in the eyes and eyelids partially closed. Share the love if you’re lucky enough to receive a slow blink by slow-blinking right back.

You can learn more about building a loving, slow-blinking bond with your cat by reading The Essential Guide to Cat Care from Perfect Pets.

According to the Pet Food Manufacturers’ Association, a massive 3.2 million households across the UK…

6 Cat Breeds that You Will Love

8th August is International Cat Day, so we think it’s the perfect time to introduce…