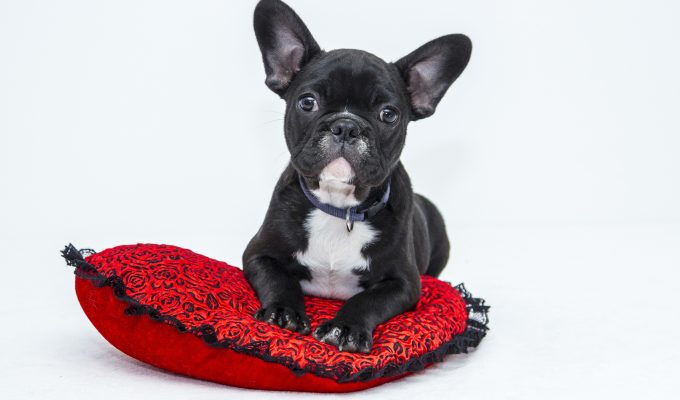 We really love our French Bulldogs – for any number of different reasons. We’ll do whatever it takes to keep them happy and healthy, and sometimes those efforts can end up being big enough to land in the news. So why have French Bulldogs been in the news over the last few years?

Back in September 2015, a Canadian pilot ended up diverting a flight to save the life of a Franch Bulldog. The heating system in the hold had broken down on the Air Canada flight from Tel Aviv to Toronto, and seven-year-old pup Simba was at risk from the temperature change. The pilot ended up landing the plane in Frankfurt to prevent his precious cargo from coming to any harm. Simba’s human was travelling in the cabin above, but due to regulations the French Bulldog was being transported in a crate down in the hold. While the heating issue wouldn’t have affected the flight’s human passengers, the pilot quickly realised that Simba’s life would be put at risk when the temperature in the hold dropped below freezing.

In total, the landing fees and additional fuel required for this diversion is estimated to have cost Air Canada around £6,450. The company received no complaints from passengers, however, even though they had to wait 75 minutes for Simba to be transferred to a different flight.

French Bulldog fans living in and around Birmingham and Leeds have something to look forward to this year, as a special French Bulldog Café will be opening in the cities for one day only – Sunday, 8th September in Birmingham and Sunday, 18th August in Leeds. This special café will briefly exist at Revolution in Broad Street, and customers can look forward to cake and cocktails with a side of puppy petting.

Plenty of pups will be attending this event, so you can take part even if you don’t have a French Bulldog of your own. The event hopes to enjoy the same success seen at the sausage dog café that was held in Birmingham earlier in the year, and is being organised by Anushka Fernando, who owns a Pug Café. What a time to be alive!

A Day at the Races

Here’s some information you need to know if you didn’t already:

Vancouver, Canada is home to a special French Bulldog Race, and it’s exactly as cute as it sounds. The event is happening right downtown from the Hastings Race Track, which itself is home to corgi racing. Think of it as a more snuggly version of the running of the bulls.

The race is happening as part of a fantastical Pet Festival, with separate races for sausage dogs and English bulldogs. A puppy stampede is also on the schedule. Those who are in the area during the festival will be given the opportunity to enter their own dogs in the race, or just to watch the fun go down. The festival, Pet-A-Palooza, takes place on Sunday, 25th August.

French Bulldogs aren’t actually French, but that doesn’t stop them celebrating Bastille Day! One of the biggest days in the French national calendar, Bastille Day is even celebrated in Moscow in the form of the France Day Festival.

This year, to mark Moscow’s fifth annual France Day Festival, the city hosted a French Bulldog Parade. The parade was a joint-effort by L’Institut Francais Russie, the Embassy of France in Moscow and CCI France Russie, with support from the Moscow Government Department of Culture.

Employee of the Month

A Dublin hotel has hired a super-cute French Bulldog to work as the hotel’s new Guest Relations Officer… erm, Pawfficer.

The Mont Hotel is set to open in August 2019, with two-month-old Monty patrolling the lobby. It is believed that the pup will be paid primarily in treats and rubs.

Some French Bulldog owners take their puppy love a little further than others, and this is why one lucky pup got to take part in their own newborn photoshoot. Californian photographer Brenden Boggs was the woman who made the magic happen. After all, why should newborn puppies be celebrated any less than newborn humans?

Boggs proposed the photoshoot idea to her friend Rachel Zee on hearing that she’d recently adopted a new puppy. Olive, the star of the show, even has her own Instagram account now.

You can find photos from the shoot on Brenden’s website.

A new scheme has been launched to improve the health of pugs, bulldogs and French Bulldogs. The goal is to help breeders to reduce their risk of breeding puppies with potentially serious breathing problems by providing them with more information about the health of their dogs.

The new Respiratory Function Grading Scheme was developed by the University of Cambridge and funded by the Kennel Club Charitable Trust, and will assess the dogs for the presence and severity of BOAS (brachycephalic obstructive airway syndrome), a breathing problem common in French Bulldogs, bulldogs and pugs. It’s hoped that this will improve the welfare and well-being of these breeds for all future generations.

Need2Know have books about all 10 of the UK’s most popular dogs, including Pugs, Bulldogs and Cocker Spaniels.