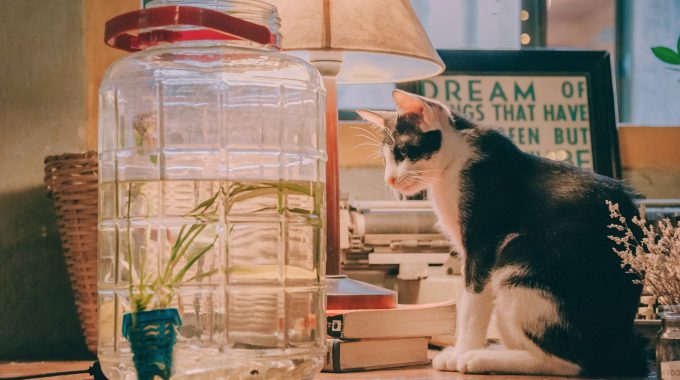 It’s a real treat for most of us, and it’s common knowledge that dogs can’t eat chocolate. But did you know that chocolate can be dangerous for cats to consume? It’s a big no no, and here we explain why.

Put simply, no. Cat owners know how difficult it can be to stop your kitty snacking on things left around as of course, they get just about everywhere! Purpose-made cat food is always best, but there are lots of human food that they can safely enjoy. However, chocolate is dangerous to cats and can even be lethal – so it’s important that you don’t let them try it and teach your children not to feed it to them. That said, cats aren’t likely to eat chocolate on their own but who knows… yours may develop a taste for it!

Would a Little Bit of Chocolate Harm a Cat?

It’s impossible to say exactly how much chocolate is ‘too much’, because much like humans, all animals have different metabolic rates. However, a small amount of white or milk chocolate (think a few chocolate buttons) is unlikely to have much of a negative effect. The ingredients within chocolate that are harmful to cats shouldn’t be plentiful in small quantities of the good stuff, but in dark chocolate, there would be more within. Baking chocolate is actually the most toxic, so be sure to pack any spare away as soon as you’ve used it!

What Is It In Chocolate That Is Dangerous To Cats?

Chocolate contains two ingredients that are harmful to cats: theobromine and caffeine. Caffeine in high quantities is dangerous to cats, but realistically unless your kitty eats a vast quantity of chocolate, there wouldn’t be enough in there to harm them. Theobromine is the real danger.

Theobromine is an alkaline compound found with the cacao plant. Physiologically, it works similarly to caffeine and tastes bitter; which is why dark chocolate contains so much of it! Theobromine is toxic to cats and when they eat it, it causes a toxic allergic reaction within the body.

What Does Theobromine Do To Cats?

Theobromine toxicity can cause a number of reactions in cats, including, but not limited to lethargy, vomiting, diarrhoea, an increased heart rate, a fever, muscle rigidity, and seizures. The way it effects each cat is different, so it may be that your pet displays just one or two symptoms: or none at all.

What Should I Do If My Cat Has Eaten Chocolate?

Keep an eye on their wellbeing. If they go outdoors, try and keep them inside so that you’re close by and can get help if needed. Visit a vet if you believe your pet has eaten more than a small amount of chocolate or if they display any symptoms of theobromine toxicity. A vet will be able to carry out tests to judge the toxicity levels and then may induce vomiting, give IV fluids, and work to treat the symptoms until the toxicity passes.

With every cat owner polarised to their own views, next to declawing, the question of…

Let Which Cat? Decide the Purrfect Companion for You

Perfect-Pets books have published a new guide entitled Which Cat? An Essential Guide to Britain’s…

Can’t Bring Your Cat on Holiday?

Christmas. Mid-term breaks. Summer holidays. Sooner or later, you’re going to have to spend some…