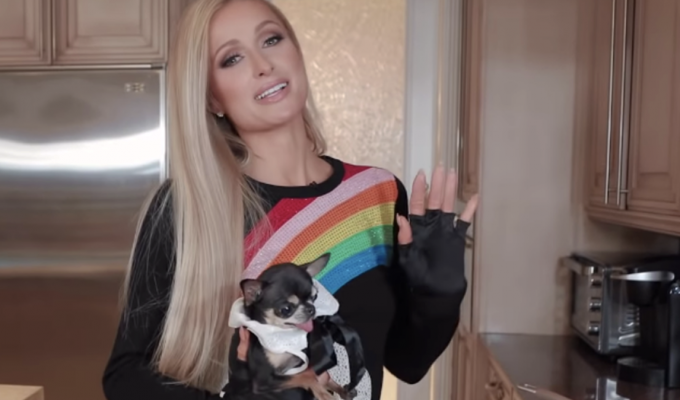 There are dogs that like to go out on a good old fashioned muddy walk with their owners and then there are dogs who are most likely to be seen with their cute little sniffers sticking out of designer handbags.

Thanks to Hollywood’s craze with ‘handbag dogs’, here’s a look at some of the celebrities who love carrying around their furry friend in a designer bag, rather than do it the traditional way with a leash.

Celebs and their love for handbag dogs

Paparazzi and fans alike have hardly witnessed socialite Paris Hilton ever venturing outdoors without her handbag pup, while Britney Spears and Geri Halliwell are rarely seen or photographed without theirs. Even Rod Steward brought his to the Grammy Awards a few years back.

Since making a first appearance on fashion runways in 2000, handbag dogs have now become increasingly popular – adorable and frivolous canines that are actually small enough to snugly fit in a handbag. Of course, who could resist them, right? Celebrities were the first ones to jump on the trend, naturally.

According to a well-known US designer, just about every “uppity class” woman in New York prefers to carry one. Also, you’ll find that these adorable and animated powder-puffs aren’t good enough for just any average handbag – designer handbags are often specifically hand-stitched for celebrity dog owners by upmarket labels like Louis Vuitton, Hermes, Chloé, Saint Laurent and Gucci.

Paris Hilton, who has really taken her handbag dog craze to the next level, reportedly owns 19 “miniature dogs”, and has even come up with a unique range of designer canine jewellery. Here are more celebrities who can’t seem to want to step out without their handbag pals:

Perhaps Simpson isn’t as well-known as Hilton when it comes to celebrities and their handbag dogs but she has been spotted more than a handful of times carrying her favourite miniature pets in different designer handbags. Even when she’s dressed casually, her four-legged friends get the royal treatment, riding in eye-catching designer handbags.

In fact, younger sister, Ashlee, has also been seen carrying her pet in a Gucci dog carrier from time to time.

The former TV personality and Miss Teen USA is known for giving her canine the best treatment when flying between airports. Her designer ‘dog purse’ by Gucci does a lot more than make a bold fashion statement – it is a sanctuary for her pet while on the move!

Fergie (from the Black Eyes Peas)

Fergie has actually come up with her own range of dog purses, just like Hilton. However, the colour scheme and overall style absolutely screams of a punk, teenage look rather than the elegant and posh style other celebrities like to carry their dogs in. Well, that was a given, no surprise there!

Yes, Paris Hilton again! We felt it was appropriate to close off the article with one more mention of Paris, as she has pretty much been at the forefront of the trend since it emerged. Did you know that while taking a trip, she bought a $24,000 designer handbag just to carry her dog around?

Burn baby, burn – the money, that is!

Perfect-Pets has an extensive range of Essential Guides covering the most popular dog breeds. Visit: www.perfect-pets.org.

Our fascination with finding the perfect companion goes back many centuries. The royal family are…

Crufts – The Most Famous Dog Show is Back

The cancellation of one of the most popular international dog shows, due to Covid, was…

Xylitol, an artificial sweetener used in many consumables, may not be a huge deal when…