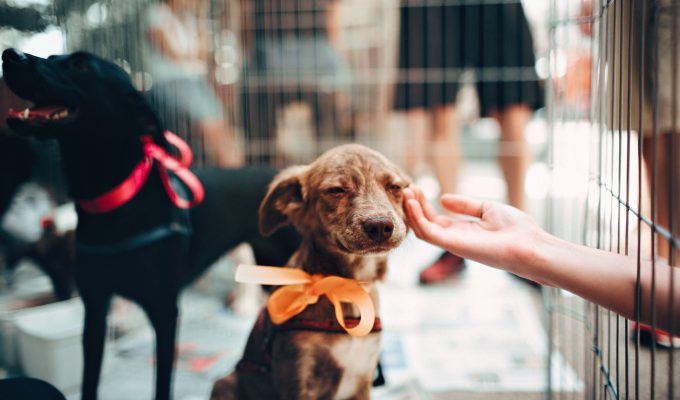 Boris Johnson has been in the news a lot recently, for a number of reasons (but mostly for reasons to do with the ‘B’ word). Whatever your political stance, there’s one choice the man has recently made which you can’t argue with: He adopted a new rescue puppy named Dilyn, and he’s absolutely adorable.

In 2014, according to Dogs Trust UK, 47,500 dogs were abandoned by their owners. These dogs were all taken to council pounds, and later 5,000 of them were euthanised.

1. Think about What Your Money Is Supporting

If you buy a new pet from a local store or breeder, there’s a good chance your money is going straight to unethical puppy mills, where puppies are often stored in clumsy, filthy and cramped conditions without proper socialisation or healthcare. No matter how much love and care you give your dog once he’s with you, you won’t be able to change the fact that you have contributed to this issue in some way.

This may well be the most important reason to adopt a dog. You give a dog another chance at life when you choose adoption. Many of these dogs have been left to fend for themselves on the streets, beaten or abandoned – they may have terrible pasts that you couldn’t even imagine. They can only truly learn to be a dog again if they’re given a loving and happy home.

3. Other Homeless Animals Can Use the Rescue’s New Free Space

Providing a shelter for homeless animals is what animal shelters are all about. When you adopt a dog from a pound, shelter or rescue charity, you’re not only changing the life of the one animal you bring home, you’re also allowing the organisation to take in a new animal and give them the care they need.

Pet rescues aren’t magical buildings with unlimited space to store all of the world’s unwanted animals. As much as a pet rescue charity will hate turning an animal away, this is often the only option remaining once the shelter reaches capacity. The more animals that get adopted, the more room there will be in the shelter to help new pets find safety and homes.

This may not be the most ‘noble’ reason to adopt rather than shop, but at the end of the day if you’re already saving a life, who doesn’t like saving a little money? Buying a new pet can easily cost anywhere from £100 to £1,000, and if you want a popular breed like a labradoodle you’ll be paying the higher of these prices.

Choosing adoption instead could easily bring your price down to around £50, though this price will vary depending on whether you find your new friend in a pound or a charitable rescue.

The dogs you’ll find in shelters and rescues aren’t all sick, injured and old (though, importantly, those that are a little more experienced are no less worthy of adoption). Your local animal rescue or pound will be jam-packed with healthy, well-behaved dogs who just need someone to show them a little love. The majority of them won’t have done anything wrong to end up in the shelter – they’ll be there because of human problems like divorce or the death of an owner. Most will be fully accustomed to living in families, and will even be house-trained!

Most rescue groups and shelters include things like microchipping, neutering or spaying and vaccinations in their adoption fees – job done!

Just because the dog you meet in a pound isn’t a puppy anymore, it doesn’t mean it can’t give you all the love in the world. Older dogs are often the most loving animals because you’ve saved them from a less pleasant situation, and they’re probably a whole lot calmer and easier to deal with at this stage than they were as pups. Give a dog the home it’s been waiting for, and it can finally be happy after years of waiting.

8. Rescues Have Dogs of All Shapes and Sizes

Every day of the year, shelters across the country will be taking in hundreds of cats and dogs. Whether you’re looking for a purebred or a cross, animal rescues often have a wide range of dogs and are sure to have the perfect breed for you. They never know who will come through their gates, but they take in lost, abandoned and unwanted dogs of all types.

For more information about taking home your own new companion, check out Need2Know’s Essential Guide to Rescue Dogs which addresses the major points one should consider before taking in a dog and re-homing it. It covers general issues about owning a dog and thinking about adopting as opposed to buying from a breeder, and welcoming a rescue dog into the home.

Need2Know have books about all 10 of the UK’s most popular dogs, including Bulldogs and Cocker Spaniels, as well as a special guide to First Aid for Dogs. Becoming a doggy guru has never been easier!

Whatever Happened to Boris’s Rescue Dog?

Major, President Biden’s shelter rescue dog, has been hitting the headlines for all the right…